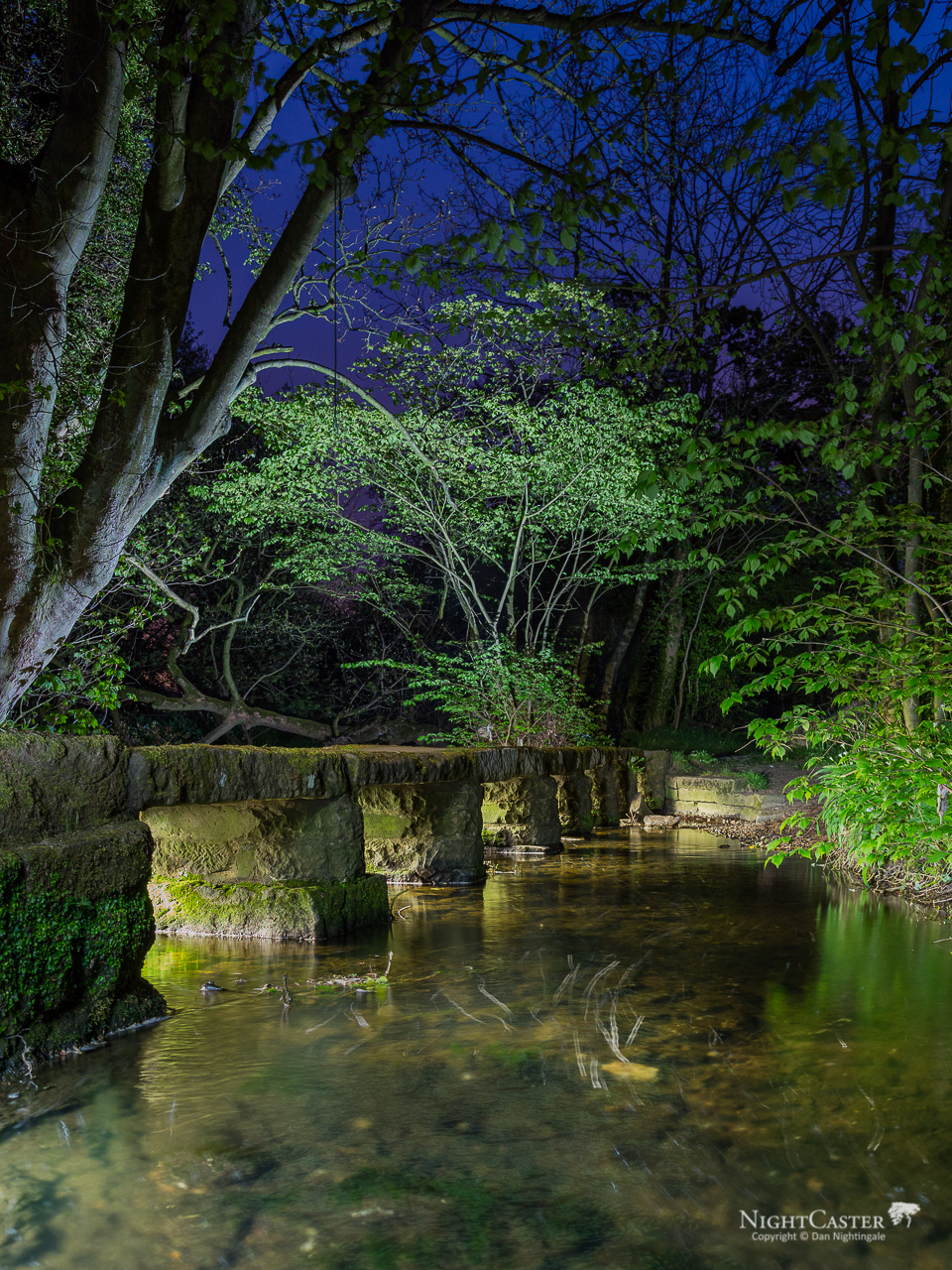 A Clapper Bridge is an ancient form of bridge, formed by large flat slabs of stone and supported on stone piers. The word 'clapper' derives from an Anglo-Saxon word, cleaca, meaning 'bridging the stepping stones'. This example crosses the river Amber and can be found just South of the village of Ashover, situated just within the Southern boundary of the Peak District.

This is yet another example of something that, for at least the first half of my life, was just there, doing it's job. Something I never really appreciated for it's beauty. Sure it was a cool bridge, but it was just way to get from one side of the river to the other, part of a footpath. Admittedly it wasn't a footpath I travelled daily, but I certainly used it a lot as a child. It was only in the last couple of years while I have been more active in looking for locations and planning images before even leaving the house that I re-discovered this bridge and remembered the footpath it belongs to.

After that I knew what I wanted to get from the location, I visualised roughly how I would frame and light the scene, waited for the weather to be suitable and headed out with my camera.

I arrived at the location and started to experiment with compositions and lighting but it wasn't long till I realised that while I was able to frame the scene roughly how I had wanted, I was unable to light it properly alone. Instead I took the opportunity to experiment with some wire wool as I had brought all the equipment with me and had the safety blanket of being over a river, so the chances of me needing to use my fire extinguisher were minimised.

About 15 minutes into wire wool spinning I had decided to try smashing the metal wisk full of buring wire wool into the bridge, to what would happen and to try and do something different to the usual images you see of wire wool spinning. This was a foolish mistake as during one swing I managed to knock the torch I use as a headtorch from my head and with a splash, it landed in the river.

Luckily the river is only about a foot deep, but with the torch being black in colour and off when it fell, it took me about 5 minutes to locate it at the bottom of the river using another torch (I always carry multiple torches). It took a further 5 minutes hanging from the bridge with my arm in the freezing water to actually retrieve it. I took the battery out straight away and dried it as best as I could on site, before calling it a night and heading home.

If anything, this failed attempt only gave me more incentive to go back and get the image that I wanted to. I knew the composition was there, I just needed some help with the lighting. The torch had also survived completely unscathed.

About 2 months later I headed back, this time with my good friend and fellow photographer. We framed the scene almost immediately as we had arrived shortly before it was dark, then set about getting the lighting right.

I placed a remote flashgun on a gorillapod and then placed this in the river at a shallow point just behind the bridge. This was aimed away from the bridge and upwards in order to light the tree and the background. Another flashgun was placed on a light stand high up to the left of the scene to light the whole area.

During the 20 second exposure I walked along the bridge (which was difficult on a less than 1 meter wide bridge in the darkness), as I walked I carried a lightstand with a warm 4000k flashlight attached to the end. The torch was held barely above the river and pointed through the bridge from the back side. As I walked from one gap to the next I rotated the light stand slightly in order to spread the light out.

As I was doing this my photographer friend was using a daylight 5500k flashlight to paint the bank on the other side of the river and was also poised with the remote trigger for the flashguns, so that as soon as I was out of the frame he could trigger the flashes and complete the lighting for the image.

We took about 3 practice exposures, figuring out how much light to paint and where, before we got the final image.

At some point during this time we heard a splash. Fearing a repeat of my previous visit we franticly searched and checked our equipment to make sure we had everything and nothing had fallen in. Dismissing it as a stone falling from the riverbank or some animal, we carried on as usual. It was about 10 minutes later when my friend cursed slightly and dove his hand into the river, only to retrieve my remote flash trigger unit, pooring with water.

I immediately turned it off (the LED power indicators were still on!) and took the batteries out, before pouring out what seemed like half the river from inside the trigger and drying the unit as best as possible.

We decided to move on, but not call it a night, so we worked our way back down the footpath towards the car, taking more photos as we went, but manually triggering flashes when we used them!

I returned home and immediately dissasembled the flash trigger, dried it's innards as best as I could with some kitchen roll, and placed the pieces in a small metal tin which I then balanced on the radiator, ready for when it would heat up in the morning. I left it to dry for 12 hours before checking for any obvious signs of remaining moisture or water damage, but couldn't see anything. I re-assembled the trigger, inserted some freshly charged batteries and it turned on just fine and still worked as it should. In fact it's still working just fine to this day, over 9 months after it's bath.

I will be reviewing the trigger and remote flashes at some point in the near future, so please come back soon for that.